Nathalie Cox - proving that Imperials are nice people as well 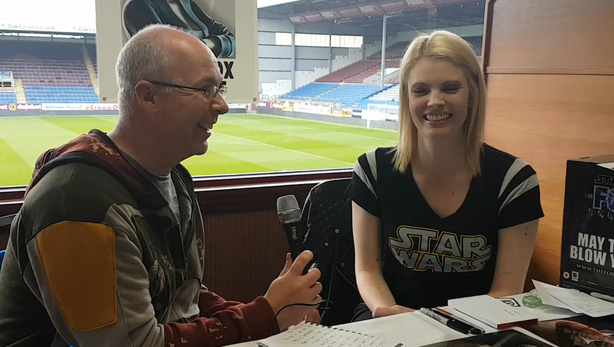 While attending the Star Wars Fan Fun Day event in Burnley, UK, in May 2017 Dave got to meet Nathalie Cox. Nathalie played the Imperial officer turned rebel, Juno Eclipse, in the hugely successful game ‘The Force Unleashed’ as well as its successor, ‘The Force Unleashed II’. Outside of Star Wars Nathalie is an actress and model based in London, UK.

Nathalie was a guest at the event in 2017 and signing autographs for fans.

Nathalie: Hello, how are you?

D:        I’m very good thank you. Thank you very much for doing this interview, we really appreciate it, especially with all the photo opportunities and all the autographs that people are hunting for.

D:        You are very popular, we’ve noticed because when we’ve tried to get to have a chat with you it’s hard when you think of all the people that are queuing. So, thank you for your time, really appreciate it.

D:        And your character, amongst all of them, except for maybe when you go towards Anakin and his complete transformation, your character went on a massive journey over the course of the computer games.

N:        Yeah, really. I mean, you know, she starts out Imperial and, by the end of the second game, it’s like, you know, full on other side completely (expressive sweeping hand gestures). 180 spin around (spinning finger around). But that’s quite cool because, from an acting pint of view, you get to play both sides, so it’s good. Yeah, it’s good fun.

D:        You say, you start off Imperial, but Imperial in a decorated squadron…

D:        One of the elite of the Empire. And then you end up helping found the Rebel Alliance.

N:        I know, yes. I mean, I’m not saying it’s all my credit, buuuttt, if it wasn’t for Juno there would be no Rebel Alliance (grinning). No, it’s great because, like the, you know she does start off in the first game and she is very much, um, plays by the rules. You know, erm, very efficient, very sort of robotic almost, and quite unemotional. And like she meets this guy, and everything just gets turned upside down. And all of a sudden she kind of goes a bit, you know, ‘ga-ga’, and yeah, she goes completely the opposite way. He really sort of opens her eyes and I think it’s a great journey for her to go on, and the story is just, it’s a great story.

D:        It is a really good story. It’s a good computer game, a well put together computer game, the visuals were fantastic. But the story was amazing.

D:        The story was such a clever story and it evolved and it grew. And in no small part down to the voice actors that played the parts. So, what was it like to play a character like that? Did you record with other characters, or were you, did you record on your own?

N:        Um, so, for the majority of it we had, we would be in the studio, and you would have the nice sort of dots on your face (pointing to her face) for the motion capture. Um, but there would be other characters in, other actors in the room with you, so that you’ve got somebody to play against. Because it is quite hard… I think, for, you know a lot of voiceover work it is just you in a goldfish bowl, um, reading lines to the ether. And then a disembodied voice of a director (expressive hand movements to the air) from somewhere says, “that was fine, you know, let’s go again” or that kind of thing. But erm, its nice that if you’ve got someone in the room, and you can actually do that. And I think, you’re right, that really shows in the sort of performances that came out of it.

D:        Yes, the voice acting was really well done. It was. For everybody. It was well put together, well directed, the story evolved in a very clever way. But the parts, the people were also part of that. When you were brought in to do the recordings, did you have the script for the entire story?

N:        And we all sat down and we did sort of a read through and character research stuff. So, I mean, from my point of view, it was just like doing a movie, basically. It was just, you didn’t have the full set and you didn’t have your costume and you had strange dots on your face, but you know… other than that it was exactly the same! Erm, but yes, we had the full script, for the first one, given to us straight away, so it was great. To read that, and just be like, “wow, this is amazing”.

D:        Yes, because it came out in a period when the films were, well, it was after the movies had ended (editor: 2008). There were other computer games around, but nothing that came out like this, that built the story in such a way.

N:        Yeah. It was fantastic, and I think, you can tell that it filled a gap in the story, of the whole story of Star Wars, because the fans just reacted so enthusiastically to it (editor:  The Force Unleashed sold 1.5million units worldwide in under 1 week). So, it’s great.

D:        And its one that’s lasted. I mean, it’s been on multiple formats, multiple different consoles…

N:        It’s good. The best thing is that, you know, coming to events like this, you get to see a whole new generation that’s enjoying it for the first time. Because the games almost 10 years old now, so, erm, and yet I’ve got younger somehow!

N:        But, yeah, it’s nice to see small kids who weren’t even born when it first came out, which makes me feel a little bit old, but, and they love it. And so, it stands the test of time I think.

D:        It does. It does. And it follows the rest of the, the way that Star Wars is very family friendly in that you don’t hear words that you shouldn’t hear. Unlike a lot of computer games these days that have a mature story, where you’ve got to be careful because of language and what have you, it is a very good story just for anybody to pick up.

D:        So I want to ask you some, erm, some more geeky style questions about your knowledge of the wider Star Wars universe.

D:        I will be gentle, don’t worry! You’ve been coming to these fan conventions for a number of years…

N:        I saw Return of the Jedi, it was the first one that I saw. It was a few years after it came out and I was tiny. Erm, I don’t really remember it. My mum says that I sat there ‘enthralled’ by it. So, I’ve got sort of a fond memory of it. Sort of ewoks and something, you know. My sister was a big Star Wars fan before me. And I think that it, erm, rubbed off a bit.

D:        Well, I suppose as a first Star Wars movie, when you are young, with furry teddy bears running around…

N:        I really liked it. It’s a good film. But, I think I am going to have to go with the very, very first one. The first time we met any of the characters.

N:        That’s my favourite. I remember having some of the original (uses hands to show a small item), um, action figures. When I was a kid. I remember having Chewbacca and, you know, the really naff ones from, like, the 80s (editor: blasphemy!).

D:        The ones that just moved their (arm straight and lifting from shoulder) shoulder and hip?

N:        Yeah, yeah, that’s it (also waving arm around as though it’s in a splint!). And the ones that everyone now wishes they had! And still in the box!

D:        So what’s your favourite ship or vehicle across everything?

N:        Rogue Shadow (she is saying that before I finish asking the question!).

D:        Ok, the last one is more difficult because of what you have done. If you got to choose would you be light or dark?

N:        (drawn in breath and a look of consternation), Oo, gosh, that is a tricky one. We are talking Star Wars here, not chocolate, right?

Afterward Nathalie signed a copy of Dave’s ‘The Force Unleashed II’ that he had brought – and refused to let him pay. What a nice person!
Meet the team